Cooperstown, N.Y. is known as “America’s Most Perfect Village.”  It has a storied past (the Baseball Hall of Fame obviously), a spectacular setting (Otsego Lake) and some pretty amazing members in its family tree (author James Fenimore Cooper for starters).  So it is no surprise that it also has a wonderful selection of public art.

A visitor will marvel at the clarity and strength depicted in one America’s earliest popular sculptures, “The Indian Hunter” by John Quincy Adams Ward overlooking the lake.  Or the magnificent solemnity of the World War I statue standing guard near the famous Otesaga Hotel (many have called this one of the most exact statues of its kind in America.).  And then there is the towering and heroic statue of James Fenimore Cooper by sculptor Victor Salvatore posted outside the front door of the Baseball Hall of Fame Library.  They are all great, but it is another Salvatore piece that strikes the most sentimental chord amongst the throngs visiting Cooperstown annually.

“The Sandlot Kid” was placed in front of Doubleday Field (dubbed “The Birthplace of Baseball) in 1940.  It is a tall pedastled statue of a young lad preparing to hit a baseball in the 1800s.  We do not know much more than that, but the statue speaks volumes.  The kid has a farmboy’s straw hat pulled down over his eyes.  He looks to be about ten years old.  He is barefoot, dressed in overly large work clothes and his bat is resting on his right shoulder.  Its placement in front of one of baseball’s “unofficial” shrines is picture perfect. Who cannot relate to this familiar scene?

And speaking of “picture perfect.”  This statue is without a doubt one of the most photographed ones in the Upstate region.  Teams of little leaguers, visitors from other countries, nostalgic grandparents and Hall of Famers alike have lined up to get a photo over the decades with this timeless kid in front of Doubleday Field.  The majority of the 300,000 visitors to Cooperstown each year no doubt have a snapshot featuring themselves posing with this popular icon.

Victor Salvatore was a respected sculptor with bronzes showcased in galleries around the world including the Metropolitan Museum of Art.  He is also the sculptor of the giant Cooper statue near the Hall of Fame.

Salvatore was married to Ellen Ryerson, the daughter of wealthy lawyer Arthur L. Ryerson who perished in the sinking of the RMS Titanic on April 15, 1912.  She was the only one of his daughters who did not voyage with thier parents on the doomed ship.

Our next “road trip” will take us to an aerie overlooking one of Upstate’s largest cities.  Here we will learn the story of an amazing bird. 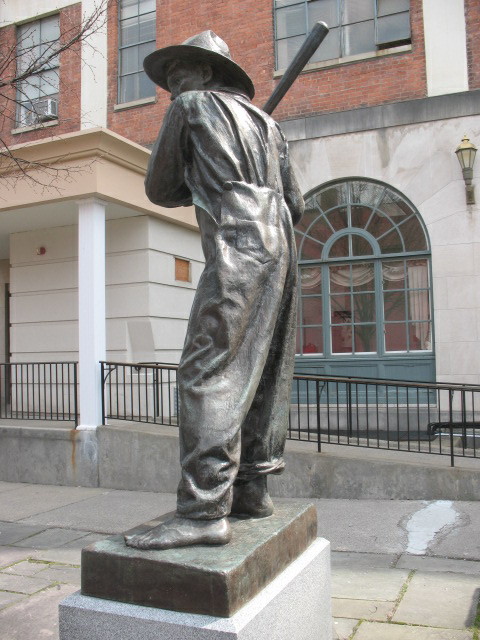 This entry was posted on August 23, 2012 by syrupress. It was filed under Guest Posts and was tagged with Chuck D'Imperio, NY Monuments, Summer Road Trip, The Sandlot Kid.